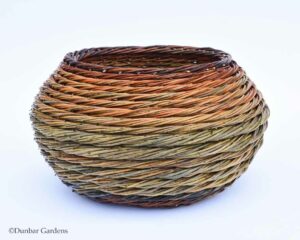 Katherine will be on a panel at the NBO’s virtual summer conference July 29-31. On Friday, July 30, 9-10:30am, Katherine is on the panel “Contemporary Innovations: Traditional Materials and Techniques” along with Peeta Tinay, Deloss Webber and moderator Annetta Kraayeveld.

There is a free event on Thursday afternoon and a paid program of 4 panels on Friday and Saturday. In addition, there is an online exhibit for NBO members work titled “Every 1” which will ‘open’ on Thursday. See the NBO website for all of the details. 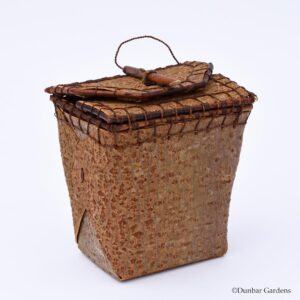 Katherine has two of her willow bark artworks in the “Arts at the Port” exhibit as part of the Festival August 6-8. The work was juried by Carrie Collver, gallery director of the Schack Art Center in Everett, WA. There are more than 100 artworks by 90 regional artists in the show.

Katherine’s work includes “Take out” (image to the left) which was a reaction to the Covid pandemic and a piece named “Button box” which can be found on our ‘baskets in stock‘ page. 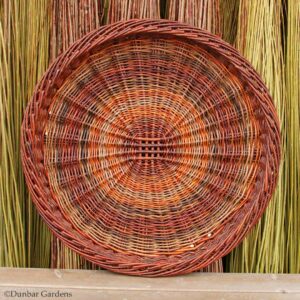 Katherine was recently informed that her Irish potato basket that is a permanent part of the collection at the Smithsonian’s Renwick Gallery is currently on display as part of “Connections”. The gallery displays a variety of contemporary craft from their collection on the second floor in this exhibit. If you browse the work on display, you can imagine how honored Katherine is to have her basket hanging next to some of these artists. The basket was chosen by curator Anya Montiel.

The Irish potato basket was one of several baskets originally purchased and donated to the Smithsonian by basket collectors Steve Cole and Martha Ware. The image on the left was taken of the basket in 2011 here on the farm before we shipped it off. Katherine will always be thankful for Steve and Martha’s generosity in donating their large collection of American baskets to the museum. You can read more about this collection and the original exhibit in 2013 at the Renwick here on our blog. 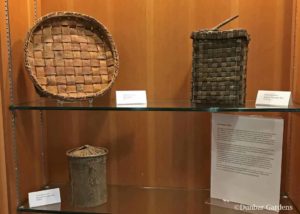 Of Branches and Baskets: The Art of Willow

Elisabeth C. Miller Library at the University of Washington Botanic Gardens, 3501 NE 41st St., Seattle, WA 98105, February 3-February 28, 2020.
Katherine has eight of her baskets on display as part of a group show curated by garden designer, writer and photographer Daniel Mount. The exhibit includes baskets, paintings, photography and works on paper by seven artists. There will be an opening reception which Katherine will attend on Thursday, Feb. 6 from 5-7pm. The library is open to the public. Most of the work is for sale with a portion donated to the library. 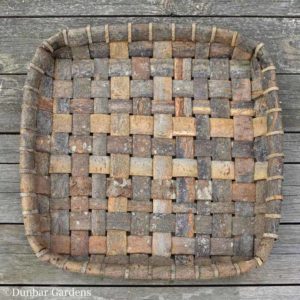 Northwest Designer Craftsmen (NWDC) presents a juried exhibition from March 5-April 11, 2020 at the Schack Art Center in Everett, WA. There will be over a hundred twenty fine craft artists represented in a show juried by Nora Atkinson, Bruce Pepich and Michael Monroe. Katherine will have one of her willow bark trays titled ‘Lichen Up’ on display. The opening reception will be on March 5 from 5-8pm. It is preceded by a panel of the jurors from 3:30-5pm discussing current trends in craft in America.
There is also a bus tour of artists’ studios and galleries in Skagit and Snohomish Counties on Saturday, March 7. Katherine will be demonstrating her work at the studios of Layne Goldsmith and Phillip Baldwin in Snohomish as part of the tour. 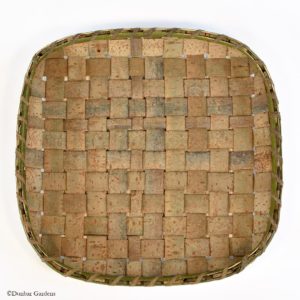 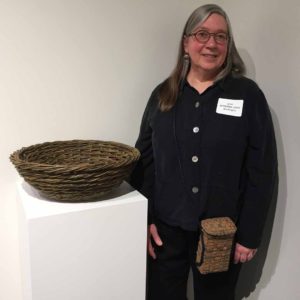 Rooted, Revived, Reinvented: Basketry in America: A traveling exhibition organized by the National Basketry Organization in partnership with the University of Missouri that visually chronicles the history of American basketry from its origins in Native American, European, and African traditions to its contemporary presence in the fine art and craft worlds. Katherine Lewis will have a basket represented in the “Living Traditions” part of the exhibit which showcases artists from the 20th and 21st centuries whose baskets perpetuate and transform the historical traditions in which they work. The exhibit is currently showing at the South Dakota Art Museum in Brookings, South Dakota until January 12, 2019. 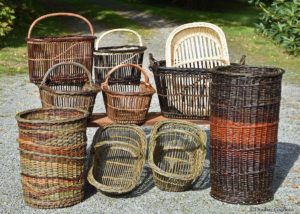 Art’s Alive La Conner: November 9-11, 2018, Maple Hall in La Conner, WA. Katherine has been invited to be one of the invitational artists in this year’s exhibit. She has made a good number of new baskets for this event seen in the photo. Many of them are fitched willow baskets. Katherine enjoys the challenge of this traditional technique, and she wanted to present mostly functional baskets for this show. She will also be doing a willow basketry demo on Saturday, Nov. 10 from 12-2pm. 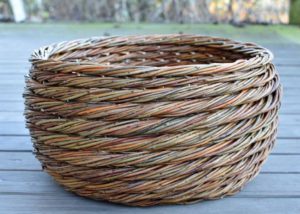 There is an exhibit of baskets by members of the Northwest Basket Weavers Guild that will be open at the Whatcom Museum concurrently with the Rooted, Revived, Reinvented: Basketry in America exhibit. View a selection of artwork juried by Lisa Telford and Katherine Lewis, artists featured in Rooted, Revived, Reinvented. Members of NWBW will be on hand on opening day to talk about basketry and the artwork on display. Katherine will have three willow baskets on display. This exhibit will also run February 3 – May 6, 2018. 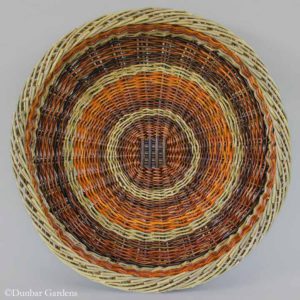 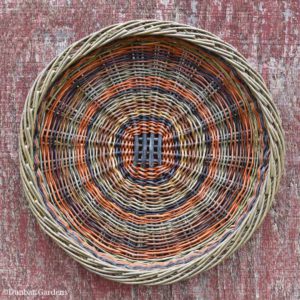 Pacific Northwest Quilt & Fiber Arts Museum 20th Anniversary Festival: October 6-8, 2017 in La Conner, WA. The museum is celebrating 20 years of presenting exhibits and programs in the fiber arts. Katherine Lewis has donated the basket at the left to the auction for her appreciation of the opportunities that the museum gave her with a solo exhibit in August, 2015 and part of a group exhibit of basketry in July, 2017. 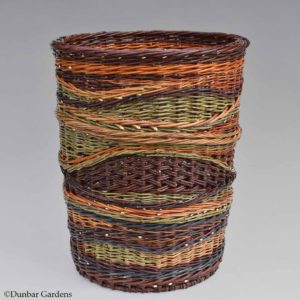 American Art Company in Tacoma, WA. July 20-August 26, 2017. As an instructor at the upcoming National Basketry Organization conference in Tacoma, Katherine Lewis was invited to submit one of her baskets to the exhibit “All Things Considered 9”. There will be a wide variety of juried contemporary basketry on display. Katherine is grateful to show her work “Home Grown” which shows off the beauty of the willows grown on her farm. 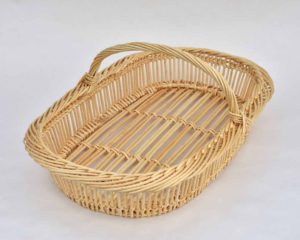 More To Consider 2 at the National Basketry Organization Biennial Conference in Tacoma, WA. July 19-22, 2017. This exhibit is an open, non-juried invitational for work of NBO Members and conference attendees that will be displayed at the beautiful Kittredge Gallery on the campus of the University of Puget Sound during the conference. The NBO’s Guild Advisory Committee initiated this exhibit at the last conference to allow more members to share their work. Katherine Lewis will be displaying her basket “Gathering” made from hand peeled willows. 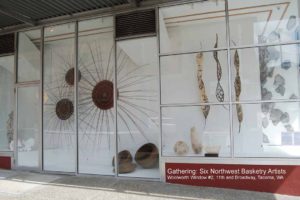 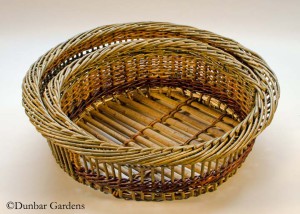 Pacific Northwest Quilt & Fiber Arts Museum in La Conner, WA. “Woven Basketry” June 28-July 30, 2017. Katherine Lewis was recently invited back to this wonderful museum for a “creative basket making exhibit” along with Danielle Bodine and Nancy Loorem Adams. Katherine will have 8 to 10 baskets that represent a variety of forms and techniques. Both Danielle and Nancy are from Whidbey Island and are also members of the Northwest Designers Craftsmen. 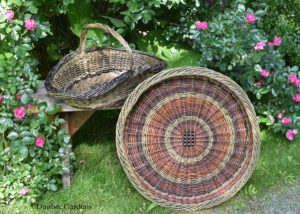 Art of the Garden at the Schack Art Center in Everett, WA. June 15-Sept 2, 2017. This biennial exhibit is a celebration of art created to enhance the garden and bring the garden into the home. Katherine made a garden gathering basket and an Irish potato basket from willows grown in our garden. What could be more appropriate? 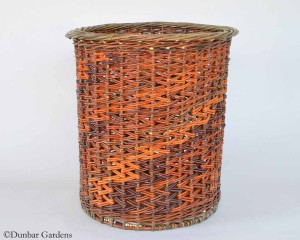 La Conner Quilt & Textile Museum: August 5 – 30, 2015 in La Conner, WA. Katherine Lewis has been invited to exhibit her baskets in the museum’s Landmarks Gallery for the month of August. There will be an opening reception on August 5 from 4-6 pm that will be free to the public. This is a great fiber arts venue and Katherine is excited for the opportunity for her first solo show. 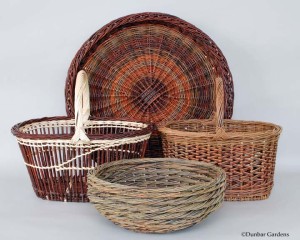 A Measure of the Earth: The Cole-Ware Collection of American Baskets: October 4, 2013-December 8, 2013, Smithsonian American Art Museum Renwick Gallery. Katherine Lewis has several baskets in this collection which was generously donated to the Smithsonian by collectors Steve Cole and Martha Ware. There is an exhibit catalogue authored by curator Nicholas R. Bell with photos of all the baskets and interviews with the makers. Read more about the exhibition on our blog.

Unfortunately due to the federal government shutdown the exhibition opening was delayed. Katherine was unable to visit the exhibition opening while visiting Washington, DC in early October. Read about Katherine’s visit to Washington 2nd District Representative Rick Larsen’s office in the Skagit Valley Herald. A second visit was successful in November, and you can read about Katherine’s visit to the Cole-Ware Collection on our blog. Baskets are for sale at the farm year round at our simple farmstand. Phone or email ahead to guarantee we are available.

Baskets can also be shipped and Katherine will consider work by commission. Check out the willow basket gallery for photos of Katherine’s baskets and prices.

If you would like to see photos of willow baskets we have in stock, click here for the web page.